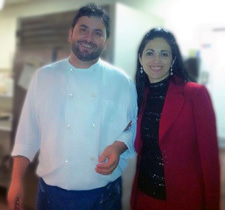 EVANSVILLE GREEK COUPLE FINALLY GETS TO HAVE THANKSGIVING AS CITIZENS

“Look around,” Doros Hadjisavva said sweeping his arm toward his nearby wife and children and bustling restaurant. “This is what Thanksgiving means to me.”

Today is his first Thanksgiving as a U.S. citizen, making the day even more precious for the Acropolis restaurant owner.

Doros and wife Ellada Hadjisavva have been in the U.S. since 1992 and 1993 respectively when they each came from Cypress, Greece, for college. After graduating, they decided America was home and worked toward becoming U.S. citizens — a lengthy, expensive and difficult process, they said.

“We could have stayed on a Green Card as permanent residents but this is home for us,” Ellada said. “There are limitations without citizenship like not being able to vote. It was important to both of us to become citizens so we could participate fully and vote.”

Both began the process in 2000 and expected to go through it together at the same time. Ellada received her Green Card in 2005; Doros was shocked to not get a similar notification.

He called the “800” number asking where his Green Card was. They said it was “processing.” Doros made this same call countless times over the next two years and always got the same response, nothing more and no explanation. During one of his routine calls, Doros was told the system was down. He asked how he could find out his status and was transferred to another processing center in Texas.

The man initially answering the phone was angry wondering how Doros received the number but softened and told Doros he would look up the case.

“He told me, ‘Did you not get your Green Card yet?’” Doros said. “I told him I had been waiting for two years, and he said, ‘You should have gotten it two years ago.’”

Turns out Doros’ application was paper-clipped to Ellada’s. When her application was accepted and processed, his was overlooked and filed away never to be seen again; until the fates worked their magic, Doros said.

“I’m so grateful the system was down at the same time I called,” he said. “Otherwise, who knows; I may still not have my Green Card today.”

Later that night, the online status of his case moved from “processing” to “accepted.” Days later, his Green Card arrived in the mail.

The couple did the work to become citizens themselves; to go through an attorney costs about $20,000, Doros said. One must have their Green Card for four years and three months before applying for citizenship. Each filed to the

“I consider myself almost an immigration expert,” said Ellada, director of economic development for Vectren. “I’ve helped five others so far. I see it as one way to give back. It feels good.”

Both of their citizenship ceremonies were emotional for the couple, she said. During hers, their oldest daughter Andriana, now 14, asked if this now meant her mother was no longer Greek.

“I’m always going to be Greek in my heart,” Ellada recalls telling her daughter. “I just wanted to be an American citizen too so I can now be like you.”

Andriana said she’s grateful that both parents are now U.S. citizens and that she didn’t realize just how important it was to them until after they’d achieved the milestones.

“This means we have two places to call home — here and in Cypress,” the girl said.

Doros said those born in the U.S. don’t understand the emotions the couple went through becoming U.S. citizens.

“I don’t think Americans have a true appreciation for what they have,” he said. “This truly is the land of opportunity.”

Ellada said the opportunities they’ve had in America have made the couple who they are today.

“We wouldn’t be the same people we are if we hadn’t come to America,” she said. “I’m proud to have gone through the process to become a citizen here. This is our home; it is where we had our children. America is our home.”

And like most Americans, the Hadjisavva’s celebrate Thanksgiving, Ellada said it is one of their favorite holidays. They will have a table full of traditional Thanksgiving foods — turkey, corn and cranberries, but will also have some Greek dishes that have become a part of their own family’s celebration — rabbit and pork and others.

In addition to celebrating with tasty food, the family also keeps the holiday’s true spirit alive by honoring and remembering all they are thankful for.

“This country has given us so much,” Doros said in expressing his gratitude for U.S. citizenship. “We are grateful we have been able to give something back to it as well. Evansville embraced us, welcomed us. That is why it is important for us to give back.”

The couple, who have owned the Acropolis for 13 years, said the community has always been so welcoming and generous toward their family that they do their best to give as much as they can. They donate food to a variety of charities and events during the year and have taken a special interest in the Ronald McDonald House, an organization the family utilized when their youngest son Yiorgos, now 7, was hospitalized at Kosair’s Children’s Hospital in Louisville for weeks when he was 1.

“It warms our hearts to be involved with these nonprofits,” Ellada said. “In Greece philanthropy comes only from the very top. Here, it is different. We give what we can — time, money and food. Greeks are known for their hospitality. Doros and I try to bring that Greek experience to Evansville.”

Doros said Acropolis is a true family-owned business. Not only is he involved in most aspects of the restaurant from the kitchen to the books to the dinning room but he also treats his employees as family. “We tell them to treat the restaurant as a family and respect it and it will respect you back,” he said. “They are our family. We are closed every holiday. If I want to be home with my family, I want my employees to be home with their families.”

That outpouring of generosity isn’t limited to employees and organizations across the Tri-State. Doros is known to send a table of regulars a special dessert or appetizer on the house and can be seen any day of the week chatting with customers and passing out his signature warm Greek hug.

His children think of the restaurant as a second home and its customers as their family too. On a recent Friday night all three — Andriana, 14, Maria, 11, and Yiorgos, 7, — were spotted talking to regular customers they’ve gotten to know through the years.

“We are all about family,” Doros said. “As long as I’m healthy and I have them, that’s all I am going to ask for.”