Home/About Us, Uncategorized/About the Owner 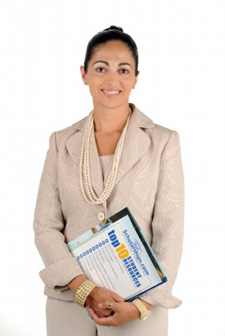 Ellada Hadjisavva grew up on the island of Cyprus in the Mediterranean Sea just east of Greece. On an island where tourism is the main source of income and speaking English was the key to getting a good job, Hadjisavva’s father encouraged all his kids to learn the foreign language. Hadjisavva followed that advice and then some. She is now fluent in five languages: Greek, English, French, Spanish and German.

“When I was in high school, my dream job was to be in an embassy,” she said. To do that, she had to be trained as a translator. After high school, she came to the United States to attend Brescia University in Owensboro, Ky., for her undergraduate work. Unfortunately, the school did not have translation as a viable major. Instead, she ended up majoring in foreign languages and obtaining her teaching license in Spanish, language arts and English as a second language. She then got her master’s degree in linguistics and secondary language acquisition from Murray State University and took a job at Murray State as an international admissions coordinator.

Eventually, she received a job as director of recruitment in the Office of Human Resources for the Evansville Vanderburgh School Corp. and was named to the position of executive director of the Southwest Indiana College Access Network, or SICAN, last year.

She said the goal of SICAN is to work with potential first-generation college attendees while they’re still in high school and help them prepare for college through one-on-one sessions and scholarship opportunities, among other things.

The staff also makes sure students get though the tricky paperwork such as filing the FAFSA, a federal package that determines how much financial aid a current or prospective college student can receive based on income. Last year on its FAFSA filing night, which it did in partnership with the United Way, SICAN helped 92 students and families complete their paperwork.

“We make sure kids who don’t have support at home navigate the system,” Hadjisavva said. “First and foremost is for them to stay in school and finish high school.”

Even after a short time on the job, Hadjisavva’s efforts have not gone unnoticed by EVSC Superintendent David Smith.

“Ellada has done a great job leading the Southwest Indiana College Access Network, helping high school students and their families realize the potential that high school graduation and acceptance to college has for potential earnings and future successes,” Smith said.

In addition to her work with Vanderburgh students, Hadjisavva also is involved in a completely different line of work. She, with husband Doros, are owners of The Acropolis restaurant in Evansville. Through the restaurant, they have been able to give back to the community despite the tough economy.

“We’re very involved with the Ronald McDonald House,” she said, “as well as the March of Dimes and other organizations.”

But her involvement doesn’t end with just SICAN and the restaurant. Hadjisavva also is a board member at the YWCA as well as the Koch Family Children’s Museum. She also is a member of the nonprofit group Hospitality and Outreach for Latin Americans, a group that helps incorporate Latinos into American society.

As someone who understands the importance of language, Hadjisavva is proud of the group’s efforts to help Latinos, some of whom don’t speak English, feel like they belong in the community. But the group goes beyond that; it also helps educate English-speaking people in the community on Latin American culture.