Home/About Us, Uncategorized/About the Chef 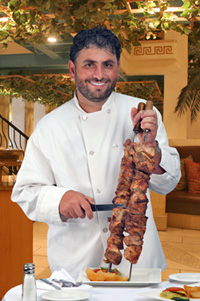 Doros Hadjisavva grew up in a sunny Cypriot village of 1,500 residents. The island’s economy relies heavily on tourism, and as teens, he and all of his friends spent their summers working at restaurants or bars — that is, when they weren’t lounging on the beach 10 minutes from home. Hadjisavva came to the United States in 1992 to enroll at New Jersey’s Montclair State University. “I thought I would finish school, go back home, and work in a bank,” he says. But as he says, a woman got in the way. He fell in love with Ellada, a fellow Cyprus native and a close friend’s younger sister, then a student at Brescia University in Owensboro, Ky. They married in 1998.

After a few smaller restaurant ventures, Hadjisavva found a gem of a building that formerly housed Darryl’s 1820 restaurant and opened Acropolis in November 2003 after extensive remodeling. The restaurant’s patrons savor the herb-rich tastes of Greek cuisine and the occasional shout of “Opa!” from a waiter setting fire to a plate of saganaki (Greek cheese flamed in brandy).

Much of the region’s cuisine includes lean meats and hear-healthy olive oil. Even So, Hadjisavva notes, “We have a saying: Greeks build our houses as if we will live forever, and we eat as if we will die tomorrow.” Acropolis serves up abundant portions of mostly authentic dishes, including tender baby lamb ribs marinated in Greek spices; kota lemonati, chicken cubes sauteed with artichokes and tomatoes in a tangy, creamy lemon sauce; and shrimp Acropolis, served in a homemade marinara sauce with a Greek twist (feta cheese, wine, and herbs).